I went to carry on working on the leaks on her today, I arrived at around 9:30 and dragged the big water pump from the car and carried it down to the her only to find out that she was still afloat! Its been nearly a week and she was still afloat, I was shocked: 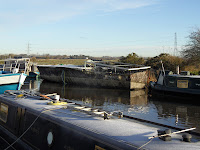 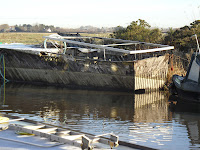 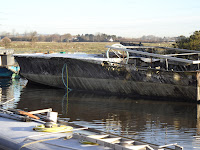 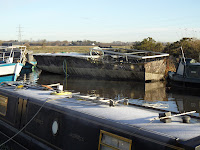 Although she has been afloat for 6 days she is still very, very wet inside as you would expect after being on the bottom for so long, I've taken a load of photos of the inside. The first three are of the front cabin, you can see the bench seats and also the depth of the bilge as she has a very shark V hull: 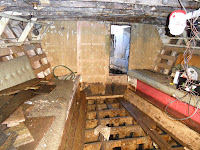 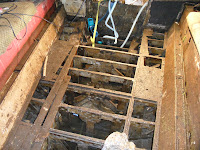 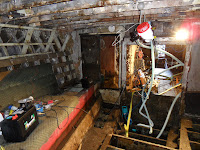 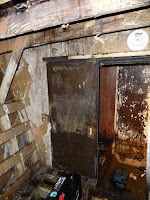 The next couple of photos cover the toilet that the general staff would have used, you can see the toilet has been removed, however the sink is still in place: 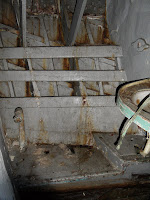 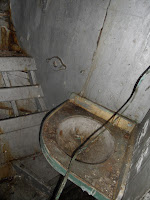 Next is the corridor that leads to the toilet, corridor is used in the loosed sense :) It appears that the wall of the toilet is made from some form of metal, when I restore her I'll clean it up and see.  In front of that is the chain locker: 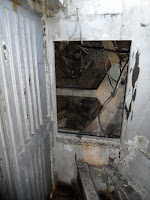 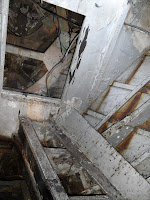 Next are some photos of the officers toilet, which appears to be fully intact: 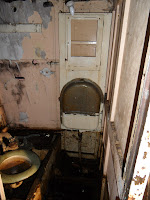 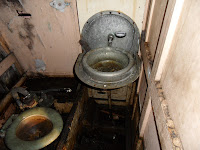 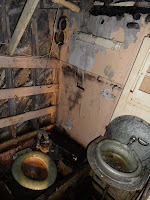 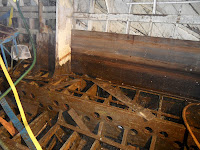 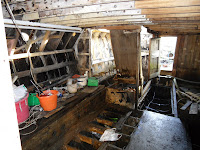 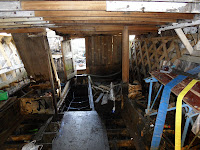 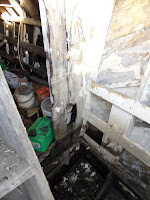 The stairs used to come down the centre of the boat, hence the raised stringers below, what you can't get a feel for is the depth, its at least 18 inches, rising to nearly 24 at the rear: 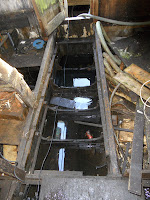 Below is the fabled glove that is being used to seal up a 3 inch hole in the side, its actually doing a very efficient job: 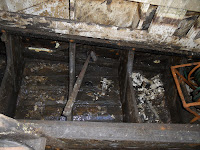 The view out the back, last week this contained two x four foot trees and a floating vegetation mat about 6 foot across.  There was also several large piles of timbers. I moved most of the timber, however due to the harsh frost last night I couldn't do them all as they had frozen together! 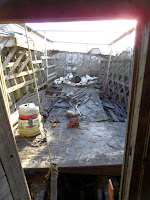 There appears to be a largish leak somewhere under those planks, when I next go I need to lift them and figure out what and where its leaking, I suspect at that point she will be afloat without the need for pumps.

We have spoken to the company who are going to do the lift and provisionally its going to happen in January 2013.  With her hopefully being towed to the Marina where the lift out will take place either at the end of December or the beginning of Jan.

at 19:14
Email ThisBlogThis!Share to TwitterShare to FacebookShare to Pinterest

Today I pumped her out to see what I need to do to patch the hull.  I managed to pick up a 3 inch petrol driven pump, for a reasonable price (£110) and some 3 inch suction hose.

Getting them onto her was a challenge as she is moored several hundred yards away from the lock, on the other side of the canal so everything has to be dragged through a sheep field and the pump wasn't light.

After a couple of false starts I managed to get the pump pumping... quite a sight, a 1000 litres per minute pump shooting water into the canal: 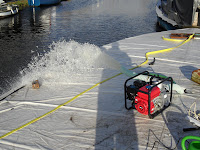 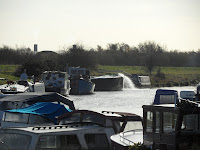 The biggest problem with the pump is the pipe, as the pipe fills with water it puts a huge strain on the pump and even drags the pump across the deck or at one point nearly pushed the pump overboard!

There is the remains of a waterproof bulkhead dividing the front from the rear, the pump out of the rear took about 30 minutes, but in elapsed time it was more like an hour as I had some problems with the pump and it snapping one of the pipe connections.

I've installed mains power, including a pair of 400W floodlights, one for the rear cabin, the other for the front.  The images below give you an idea of the debris that is floating around in her, I've started clearing the inside ready to fix the hull, but I need to come up with another method of pumping her out as it was a little hit and miss.

Looking at the hull it only really appears to be leaking from 2 places, its "weeping" at the rear, along a 4 foot length.by the chine, as its been repaired previously I'll more than likely patch that one from the outside.  The good news is that a small submersible pump is sufficient to keep up with the water flow.

The front is a different kettle of fish, water is pouring in at a huge volume, well more than the 150 litre/min that the little electric pump can dish out, although its no match for the 1,000 litre/min of the petrol pump! 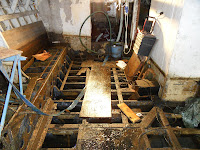 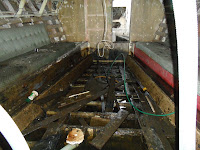 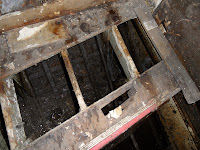 at 18:20
Email ThisBlogThis!Share to TwitterShare to FacebookShare to Pinterest

We visited Preston Marina (http://www.prestonmarina.co.uk/) today to talk to Chris Miller about lifting HSL 2552 out and the various options that we have.  He wasn't around so the staff rang him on his mobile and while we waited for him we had a lovely cuppa and scone in their cafe, can highly recommend it if you are passing by.  We hadn't rung ahead so it was great that he came in to see us.

I've ordered the plans from the Greenwich Maritime Museum, who have also been incredibly helpful, once they arrive we'll pop up to the marina again so they can plan in more detail what will be required.

All this has only been possible because of the great help from Ken Hunter at the RAF Museum at Hendon, who has been most helpful in working out where I can find the information I need. I'm hoping to visit Hendon in the next couple of weeks at which point I can thank him in person.

I bought a cheap, yet powerful 1,000 litres a minute petrol driven water pump today that should make short work of pumping her out, I'll be ordering 4 large capacity (18,000 litre per hour) bilge pumps this weekend and also some other bits and pieces so I can pump her out next week, patch the hull from the inside using some underwater glue that I have and hopefully she'll start to stay afloat ready for her epic journey.

The next task is to find a home for her, with her being on a steel type pallet it opens up a larger number of places that she can be worked on.
at 18:47
Email ThisBlogThis!Share to TwitterShare to FacebookShare to Pinterest

I received an email today from the National Maritime Museum, they have tracked down some copies of some of the drawings for the HSL and for a small fee they will make copies and post them to me.

I only emailed them a couple of days ago, so that is what you call service.

I've also received some mail in the post, as she is now registered on the historic ships register.